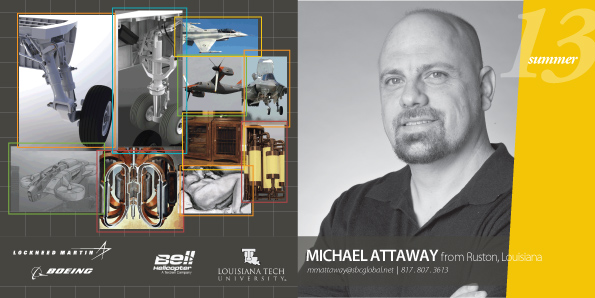 Tearing things apart, bringing ideas together. At an early age, Michael Attaway showed an affinity for all things mechanical. This curiosity often led to the chagrin of his parents who had to deal with the remains of destroyed household appliances. After graduating from Louisiana Tech University with a Bachelors in Mechanical Engineering, Michael moved to Dallas-Fort Worth and began a career in the aerospace industry. He has worked on many high profile programs such as the F-35 JSF Lightning II, variants of theF-16 and the BA-609 concentrating in landing gear systems integration and design. Michael has also always been an artist and strongly desired the pursuit of a more creative career.