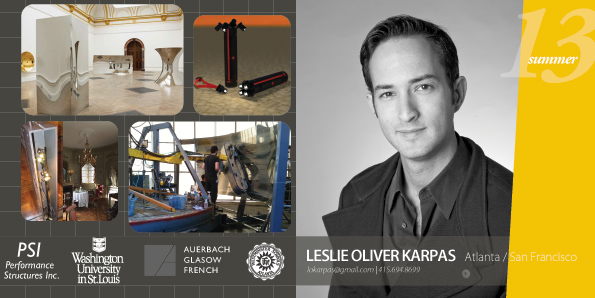 Leslie Karpas
Les has worked as a tool and fixture designer in the creation of world famous sculpture for the artist Anish Kapoor. Les earned a BS in Architecture and a BA in Technical Theater from Washington University in St. Louis in 2005, and has a very user experience centered approach. He has worked as an Architectural Lighting Designer and Theatrical Consultant for the firm Auerbach Glasow French | Auerbach Pollock Freidlander; where he worked on the Wrightsmen Gallery at the Metropolitan Museum of Art, and permanent theaters for Cirque Du Sole. While at Art Center, Les is enthusiastic about enhancing his understanding of business acumen, brand based aesthetics, and ergonomics in the pursuit of creating utilitarian human centered tools.